1 in 69 women will develop ovarian cancer in her lifetime

Results
The Assessment of Different NEoplasias in the adneXa (ADNEX) model contains three clinical and six ultrasound predictors: age, serum CA-125 level, type of centre (oncology centres v other hospitals), maximum diameter of lesion, proportion of solid tissue, more than 10 cyst locules, number of papillary projections, acoustic shadows, and ascites. The area under the receiver operating characteristic curve (AUC) for the classic discrimination between benign and malignant tumours was 0.94 (0.93 to 0.95) on temporal validation. The AUC was 0.85 for benign versus borderline, 0.92 for benign versus stage I cancer, 0.99 for benign versus stage II-IV cancer, and 0.95 for benign versus secondary metastatic. AUCs between malignant subtypes varied between 0.71 and 0.95, with an AUC of 0.75 for borderline versus stage I cancer and 0.82 for stage II-IV versus secondary metastatic. Calibration curves showed that the estimated risks were accurate.

Conclusions
The ADNEX model discriminates well between benign and malignant tumours and offers fair to excellent discrimination between four types of ovarian malignancy. The use of ADNEX has the potential to improve triage and management decisions and so reduce morbidity and mortality associated with adnexal pathology.

Objectives
Several studies suggest that overall and central-obesity are associated with increased breast cancer (BC) risk in postmenopausal-women. However, there are no studies investigating changes of central obesity and BC. We report on the association of BC risk with self-reported skirt size (SS; waist-circumference proxy) changes between 20s and postmenopausal-age.

Participants
Postmenopausal-women aged >50 with no known history of BC prior to or on the day of completion of the study-entry questionnaire.

Interventions
At recruitment and at study entry, women were asked to complete a questionnaire. Women were followed-up via ‘flagging’ at the NHS Information Centre in England and the Hospital Episode Statistics.

Strengths and limitations of this study

Often labelled a ‘silent killer’, ovarian cancer has signs you should look out for

Often labelled a ‘silent killer’, ovarian cancer has symptoms you should look out for. Learn to identify these and aim for early detection…

OPAL, the Ovarian Cancer Prognosis and Lifestyle study is Australia’s first study into lifestyle factors that may improve survival and quality of life for women with ovarian cancer.

The OPAL study is recruiting 1,200 women newly diagnosed with ovarian cancer, between April 2012 and October 2014. After this, researchers will analyse the information collected.

Scientists at A*STAR’s Institute of Medical Biology (IMB) and the Bioinformatics Institute (BII) have found new clues to early detection and personalised treatment of ovarian cancer, currently one of the most difficult cancers to diagnose early due to the lack of symptoms that are unique to the illness.

There are three predominant cancers that affect women – breast, ovarian and womb cancer. Of the three, ovarian cancer is of the greatest concern as it is usually diagnosed only at an advanced stage due to the absence of clear early warning symptoms. Successful treatment is difficult at this late stage, resulting in high mortality rates. Ovarian cancer has increased in prevalence in Singapore as well as other developed countries recently. It is now the fifth most common cancer in Singapore amongst women, with about 280 cases diagnosed annually and 90 deaths per year..

Studies have shown that a person’s genes can cause an increased risk in breast and ovarian cancer. This infographic shows the chromosomal mutations and the risk they can pose.
According to the National Cancer Institute, studies have shown that inherited mutations in the BRCA1 and BRCA2 genes account for 5-10 percent of all breast cancers and 15 percent of all ovarian cancers. While genetic testing is encouraged only for those who have a family history of breast or ovarian cancer, education and awareness are important to early detection and treatment.
How can a better understanding of the cause of these genetic mutations help further the cause of finding a cure for cancer?

Small cell carcinoma of the ovary is rare in adolescence. The etiology of such tumors is unknown. Several reports suggest that transgenerational exposure to Diethylstilbestrol (DES) may have deleterious effects on the genitourinary tract.

The authors describe a 15-year-old girl with small cell carcinoma of the ovary whose maternal grandmother had been taking DES while she was pregnant with the patient’s mother.

This case, while anecdotal, suggests that a transgenerational history of DES exposure should be noted, and that granddaughters with persistent abdominal pain even during childhood may need evaluation for genital tract abnormalities.

A novel approach to cancer immunotherapy – strategies designed to induce the immune system to attack cancer cells – may provide a new and cost-effective weapon against some of the most deadly tumors, including ovarian cancer and mesothelioma. Investigators from the Massachusetts General Hospital (MGH) Vaccine and Immunotherapy Center report in the Journal of Hematology & Oncology that a protein engineered to combine a molecule targeting a tumor-cell-surface antigen with another protein that stimulates several immune functions prolonged survival in animal models of both tumors.

Although dendritic cell (DC) vaccines are considered to be promising treatments for advanced cancer, their production and administration is costly and labor-intensive. We developed a novel immunotherapeutic agent that links a single-chain antibody variable fragment (scFv) targeting mesothelin (MSLN), which is overexpressed on ovarian cancer and mesothelioma cells, to Mycobacterium tuberculosis (MTB) heat shock protein 70 (Hsp70), which is a potent immune activator that stimulates monocytes and DCs, enhances DC aggregation and maturation and improves cross-priming of T cells mediated by DCs.

Binding of this fusion protein with MSLN on the surface of tumor cells was measured by flow cytometry and fluorescence microscopy. The therapeutic efficacy of this fusion protein was evaluated in syngeneic and orthotopic mouse models of papillary ovarian cancer and malignant mesothelioma. Mice received 4 intraperitoneal (i.p.) treatments with experimental or control proteins post i.p. injection of tumor cells. Ascites-free and overall survival time was measured. For the investigation of anti-tumor T-cell responses, a time-matched study was performed. Splenocytes were stimulated with peptides, and IFNγ- or Granzyme B- generating CD3+CD8+ T cells were detected by flow cytometry. To examine the role of CD8+ T cells in the antitumor effect, we performed in vivo CD8+ cell depletion. We further determined if the fusion protein increases DC maturation and improves antigen presentation as well as cross-presentation by DCs.

We demonstrated in vitro that the scFvMTBHsp70 fusion protein bound to the tumor cells used in this study through the interaction of scFv with MSLN on the surface of these cells, and induced maturation of bone marrow-derived DCs. Use of this bifunctional fusion protein in both mouse models significantly enhanced survival and slowed tumor growth while augmenting tumor-specific CD8+ T-cell dependent immune responses. We also demonstrated in vitro and in vivo that the fusion protein enhanced antigen presentation and cross-presentation by targeting tumor antigens towards DCs.

This new cancer immunotherapy has the potential to be cost-effective and broadly applicable to tumors that overexpress mesothelin.

Some wowen were fobbed off with wrong diagnoses and devastating consequences 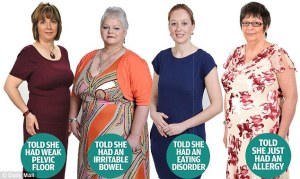 For years, ovarian cancer has been known as a silent killer.
The disease is often not detected until it has spread.

Read Why did it take so long for these women to learn they had cancer? They were fobbed off with wrong diagnoses, and the consequences have been devastating, by Cara Lee, 17 Feb 2014

If you have any concerns about ovarian cancer please speak to your G.P.

It’s a tough one. We talk about sexual health these days in such open terms, but I feel that people just aren’t yet ready to talk about gynaecological cancers.

Watch the Diaporama, and the DES infographics photo set on flickr®