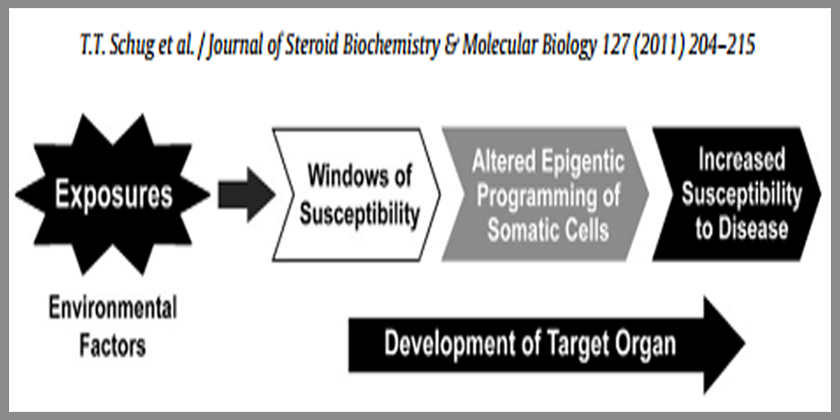 The ability of EDCs to alter reproductive function and health in females has been clearly demonstrated by the consequences of DES use in pregnant women. The daughters of women given DES while pregnant were shown to have rare cervicovaginal cancers, decreased fertility and increases in rates of ectopic pregnancy , and early menopause. Many of these disorders have been replicated in laboratory animals treated with DES during gestation. As Newbold points out, the lessons learned from 40 years of DES research in humans and animals are that the female fetus is susceptible to environmentally induced reproductive abnormalities,that gonadal organogenesis is sensitive to synthetic hormones and hormone mimics during critical exposure windows, and that reproductive disease may not appear until decades after exposures.

Proper development of ovarian follicles in the fetus is dependent on estrogen exposure during critical periods of development. For instance, mice treated with DES on postnatal day 1–5 develop multioocytic follicles as adults. Therefore,maintaining a homeostatic balance of local and systemic hormones during follicle development is necessary for normal follicle development and germ cell quality. Perturbations in hormone signaling resulting from chemical exposures during developmental periods could contribute to ovarian disorders and declining conception rates in human populations.And while the mechanisms by which EDCs alter follicle development are not fully understood, there is evidence that these chemicals are contributing to increased rates of aneuploidy, polycyctic ovary syndrome (PCOS), premature ovarian failure (POF), and altered cyclicity and fecundity. For example, studies have shown that prenatal exposure to BPA causes irregular cycles in mice, which is likely due to hypothalamic alterations in the circuitry that controls luteinizing hormone (LH) secretion and ovulation. In humans, altered cyclicity has been reported in individuals exposed to organochlorine pesticides. Indeed, cycle irregularities have been noted in women whose mothers were exposed in utero to DES.

Uterine fibroids (leiomyomas) are the most common tumor of the female reproductive system, occurring in 25–50% of all women. The risk of the development of uterine fibroids increases with age during premenopausal years, but tumors typically regress with the onset of menopause. Obesity, age at menarche and unopposed estrogen signaling have been shown to increase the risks for fibroids. The best characterized animal model for the study of uterine fibroids is the Eker rat. A mutation of the tuberous sclerosis complex 2 (Tsc2) tumor suppressor gene causes females to develop spontaneous uterine fibroids at a high frequency. Studies using this model have shown that exposure to EDCs increases the incidence of fibroids in these animals. Developmental exposure to DES causes rats that are genetically predisposed to uterine tumors to develop even more tumors of a larger size, but fails to induce tumors in wild-type rats. Importantly, DES exposure imparts a hormonal imprint on the developing uterus that causes an increase in estrogen-responsive gene expression. The potential for DES to cause uterine fibroids in humans is less clear. Two studies on DES daughters came to different conclusions. In a study of 2570 women born during the period DES was prescribed, no association was found between prenatal exposure and uterine fibroids. Another study of 1188 women found a significant relationship between DES exposure and uterine fibroids. On analysis of these studies, Baird and Newbold concluded that there was a definitive increase in uterine fibroids in DES daughters and the discrepancies between the studies was due to the differences and sensitivities of the methods used to detect the tumors.

In summary, both animal and human studies suggest a role of EDCs in altering female reproductive development. Data from animal experiments show that EDC exposure during critical periods of development, both prenatal and neonatal, can induces functional changes that appear later in life. There are data gaps in understanding the mechanisms by which EDCs carry out their action, but it is clear that to reduce the risk of reproductive disorders we must take action to reduce exposure to these chemicals.