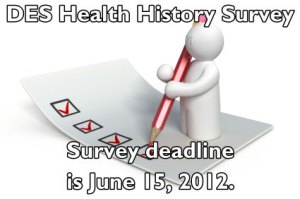 Australians are being encouraged to take part in a landmark global health survey to help reveal the true impact of exposure to the anti-miscarriage drug, DES for DES Awareness Week (June 1 – 7). It is estimated up to 740,000 Australians are have been exposed to the drug, which was prescribed from 1940 – 1970 across the country.

“If you know, or even suspect that you, your mother or grandmother might have taken this drug – this is your chance to be part of a survey that will reveal what the real health impacts this drug has had on three generations of families,” says Carol Devine, DES Action Australia-NSW coordinator, herself a DES daughter.

The survey, by DES Action USA, will give Australians the opportunity to speak out about the health impact of their exposure, which includes cancer of the vagina, cervix or breast, birth complications and infertility.

Mrs Devine is hoping the survey will help answer many of the health questions plaguing the DES community.

“Our organisation has fielded hundreds of enquiries in response to DES Awareness Weeks from right across Australia and often we are asked if a particular health problem might be related to DES exposure and often the answer is – no one knows. By working with researchers in the USA we will be able to get some real answers, and know the proper healthcare to detect these conditions earlier and potentially save lives “says Devine.

Touted a “wonder drug” in its time, DES was prescribed to pregnant women between 1940 and 1971 (and sometimes beyond). It is now known to increase the risk of certain cancers and reproductive problems in those women prescribed DES and their children of that pregnancy.

Dr Jules Black, DES knowledgeable obstetrician and gynaecologist and medical spokesperson for the DES Action group in NSW, is urging women and men who may be DES exposed to be vigilant with their reproductive health – and take action.

“It is vital that people affected get the specialised health care they need. It is important that DES exposed women get the proper screenings to detect cancers early and women exposed to DES in the womb have “high risk” care for their pregnancies. Men exposed to DES in the womb, with increased risk of genital abnormalities, should do regular testicular self-checks and report anything unusual to a doctor, such as fertility or urogenital problems” he says.

There are many people affected by DES who may not be aware of the harm caused by DES and the health care they need. More information is available at DES Action Australia-NSW or by contacting them 02.98754820.

HEALTH CHECK LIST: If you tick ‘yes’ next to any of the following, ask your doctor about possible exposure to DES:

ü  Does your mother recall having previous miscarriages or being prescribed medications while pregnant? DES was most commonly prescribed to prevent miscarriage and for pregnancy complications such as bleeding. It was also known as “stilboestrol”.

ü  If unable to ask your mother, does your health history show a series of reproductive problems such as cancer, infertility, or miscarriages?

ü  Does your mother remember only being given “hormones” during pregnancy? It is worthwhile having a check-up, informing the doctor your mother was given hormones during pregnancy. Progesterone, another hormone, may have also been used to prevent miscarriage and research has shown no problems with this.